The diversity of India impacts its people unique ways; from simple things like their way of life to complex cultural mannerisms, the diversity is open and out there (perhaps it is better to say ‘out here’!) for anyone who seeks it. This diversity however, stems first and foremost from the land – the variations in soil, climate and the behavior of the monsoon, the myriad approaches to agriculture – and hence reflects subtly, yet surely in the food we derive and consume from it.

Apart from the aforementioned factors, the food we eat is also dependent on the region’s immediate geographic terrain, whether it is sea, mountains, desert or plains. Thus each region supports its own cuisine, influenced by our long history and heritage. Here are five interesting food destinations in India where one can enjoy some of the best food the subcontinent has to offer. 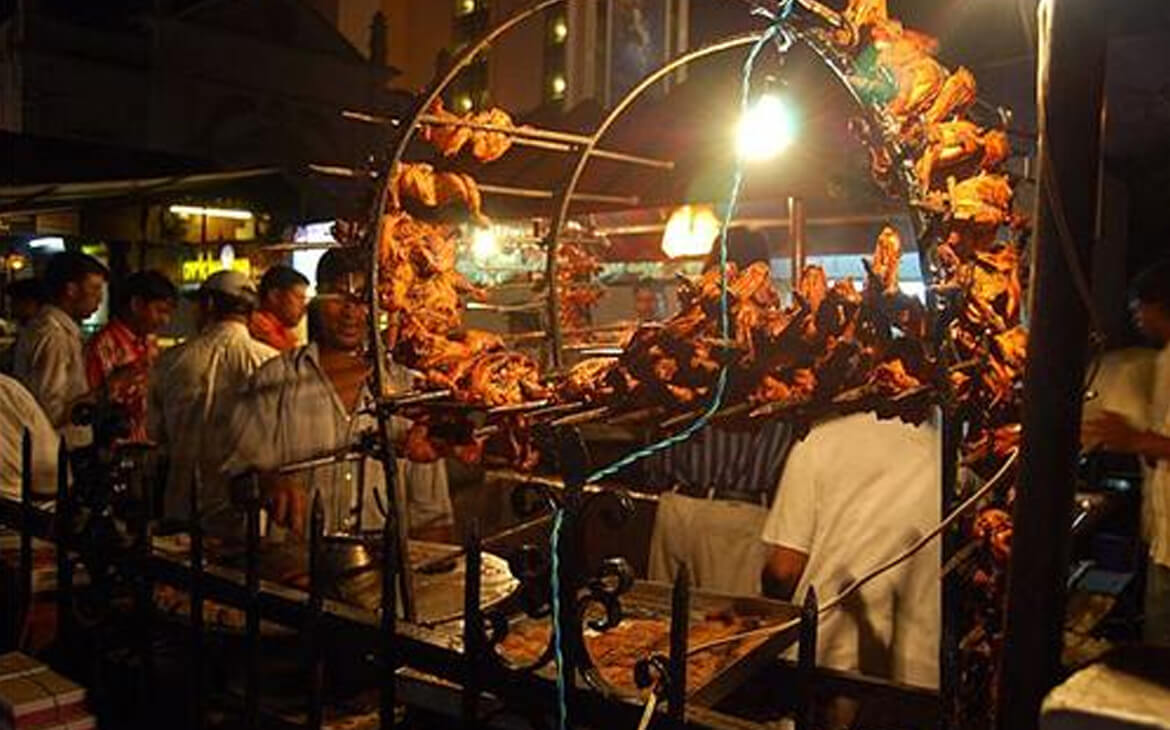 A palette which boasts a communion of Middle Eastern, Central Asia and Northern India, the traditional Awadhi fare is best feasted upon in Lucknow. The city, once a historic nucleus in the British Empire, is a great place to reconnoiter cheap, street food. The bawarchis of Awadh can be credited for the invention of the dum style of cooking, the now-famed preparation of delicacies over a low fire. Today, kebabs, biryanis, rumali rotis, kormas and warqi parathas are names associated best with Lucknow. The cuisine is known for its meat delicacies, especially those made from mutton; spices are in important ingredient in the Awadhi food. The people of Lucknow enjoy their dessert as well – kulfi and rabri in summer, and piping hot halwas of numerous kinds in winter. Chai-samosa and lassi are the street favorites, available in market places and street corners.

Where to go: Hazatganj and Aminabad have multiple street joints to enjoy traditional Awadhi food.

The tiny union territory borrows much of its local cuisine shows from its neighboring state Gujarat. Gujarati food is unique, for it harmoniously blends the sweet with the savory to provide a gastronomer the best of both worlds. The Gujarati thali is well-known as a large silver platter with small servings of a variety of foods; the portion includes vegetable curries, sweet dal, at least two types of breads (better known as rotis), deep fried farsan (crispy snacks) and a range of chutneys and pickles to go with the meal. Khaman dhokla (a sweet and sour cake), kadi (yoghurt-based curry) and shrikhand (sweet yoghurt with spices and sometimes, fruit) are some of the other offerings on the thali.

In Dadra and Nagar Haveli, apart from the traditional thali, the availability of certain vegetables, pusles and wild mushrooms, as well as the proximity to the sea – which include a variety of river fishes and crab – add to the ingredients. The local version of Gujarati Undhiyu – called Ubadiyu – is made with vegetable, beans and herbs. Buttermilk is also enjoyed in the Union Territory.

Where to go: The smaller eateries which dot Silvassa, the capital of Dadra and Nagar Haveli are the best places to enjoy the traditional food of the region. 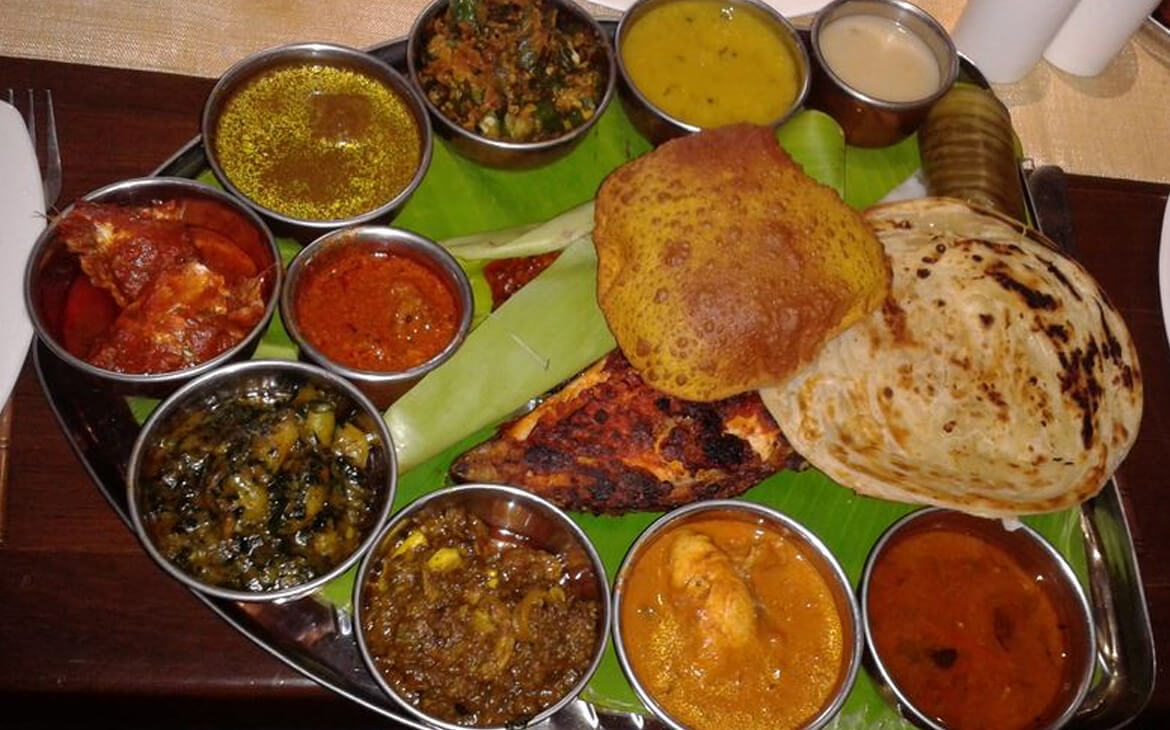 Malvani cuisine originally hails from the town of Malvan in the Sindhudurg district on the west coast of Maharashtra. Almost a standard in the Konkani manner of cooking, it draws influences from the cuisines of the neighboring regions of Maharashtra and Goa, while possessing its own unique strain of vegetarian and sea food delicacies. The Konkan coast is speckled with coconut trees, and as such, coconut – grated and fried, as paste or milk – is one of the most important and liberally utilized ingredients. The famed spicy masalas and the bland Konkanastha Brahmin style of preparation find a common ground as the former is most often than not a subject of non-vegetarian cooking, while the latter is purely vegetarian. Chicken and mutton also feature in the Malvani menu, as does rice – a staple of the area. Popular dishes include dhondas (cucumber cake), ghavan and khaproli (pancakes of different kinds), shevaya and ras (soft rice noodles served with sweet coconut ras) and tandalachi bhakri (rice flour bhakri). Solkadhi, an energy drink of sorts made from coconut milk and kokum fruit often accompanies the fiery dishes to soothe the stomach after the spicy meal.

Where to go: Multiple restaurants (Only Fish and Chaitanya being two of the best recommended ones) in Malvan serve the local cuisine, and one can choose any one of them to experiment.

From the time when the Rigveda was composed till date, he Kashmiri identity has been very deeply intertwined with the preparation of meat delicacies, mutton being the most favored. It is well-known that most pundits across India do not consume meat (the tradition is strict and popular), but the cold climate and the general lack of vegetation – quite unlike the rest of the subcontinent – compels the pundits of the region to do so. Even so, the meat of the cow (i.e., beef), the animal sacred to the Hindu religion does not feature as a part of the cuisine. Popular dishes include matschgand (lamb meatballs in gravy), qeleeya (tender lamb in milk-based gravy) and syun pulaav (fragrant rice with meat). Rogan josh, which is lamb chunks cooked in a gravy with onions, yoghurt and aromatic spices is one of the most popular delicacies of the region. The Wazwan, a thirty-six course meal sacred to the Kashmiri Muslims, is a feast of meat dishes and the art of cooking is passed down from generation to generation – almost an heirloom for the community.

The Kashmiri baking tradition, well established in Srinagar, serves breakfast pastries and sweetened breads topped with sesame and poppy seeds. Another important and unique ideal is the Kashmiri tea-drinking tradition which is observed religiously by the pundits who consume kehwa (a sweet green tea with cardamom and almonds). Sheer chai, better known as noon chai (a salty pink tea with almonds) is a staple of the Muslims.

Where to go: Food Gali at Lal Chowk and Shamyana Restaurant serve authentic Wazwan, while Ahdoos and Mughal Durbar on Shervani Road in Srinagar are the best places to sample the traditional meat dishes of the pundits. Many bakeries around Dal Lake serve both sweetmeats and chai.

The Bengali cuisine is the only supremely structured cuisine from the Indian subcontinent, with every course presented in a fixed order. Food is one of the important aspects of Bengali life. While fish and rice are the staple foods of the state, the manner in which the meat is cooked varies from region to region. Fish can be fried, curried or steamed; different fish is prepared in different manners, ensuring that the explorer has an array of delicacies to choose from. Vegetables and lentils round of the well-balanced meals of Bengal; mustard and coconut gravies are often the base for curries. The uniqueness of the Bengali cuisine arises from the standard cooking of food in mustard oil, and the utilization of panchphoron, or the five indispensible spices – mustard, fenugreek seed, cumin seed, aniseed, and black cumin seed. While the use of spices is common, eastern Bengali food is known to be spicier than that of western Bengal. To balance the spiciness of the main courses, Bengali sweet such as shondesh and rosogullas are extremely popular, and have found their way into sweet shops across the country. Mishti doi (sweet yoghurt) is also a staple dessert in Bengal. When one eats in the region, it is significant to remember the Bengali mannerism with regard to food – eat it with your hands!

Where to go: There are multiple well-known restaurants in Kolkata which plate up delicious food – Bhojopuri Manna, Sholoana and Oh!Calcutta serve great fish delicacies. Some of the best sweet shops include Balaram Mullick, K.C. Das and the Gupta Brothers. For the best mishti doi, a local’s recommendation is to sample Ganguram’s.