Stories In Stone:Rock Art Across The World!

Art since the earth’s beginnings has undergone numerous changes. Nowadays an artist has various tools to sculpt or paint or sketch on. When the earth was in its infancy humans chiseled out depictions of their existence and culture on rocks. These depictions, for archaeologists and historians worth as much as a Picasso, now are referred to as rock art. They provide great insights into the cultures of ancient people. Here are some world-famous rock art sites. 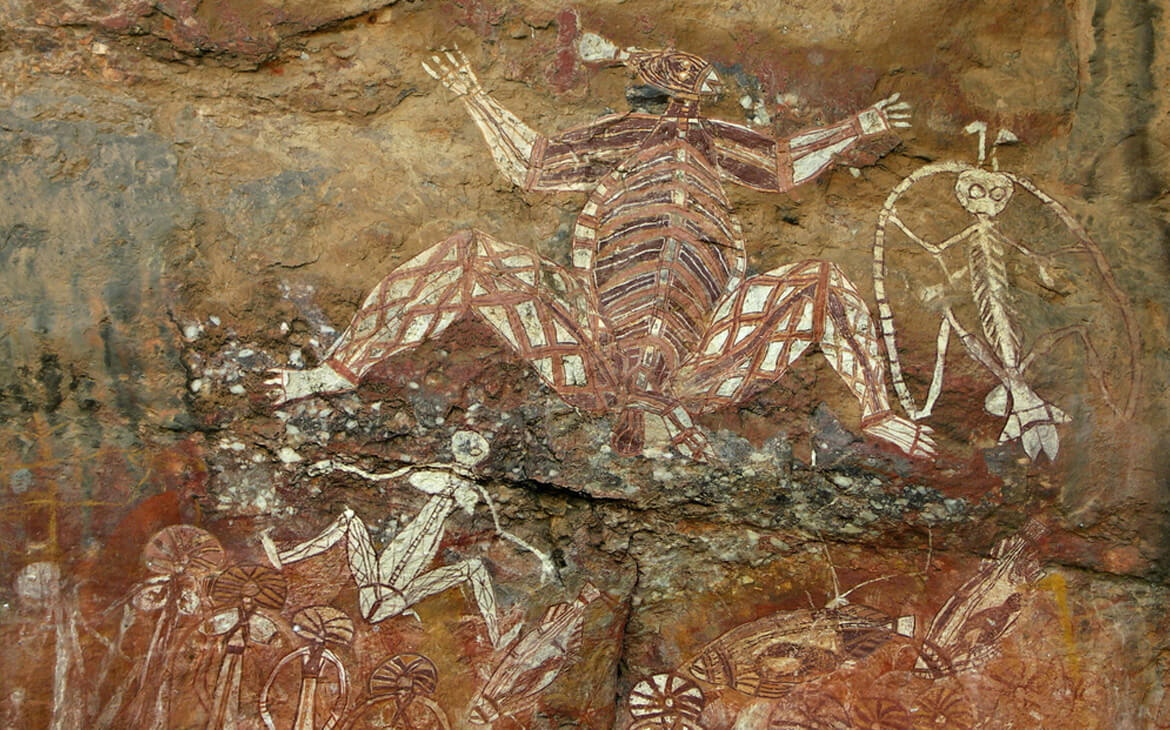 Located in Northern Territory, Australia, the Kakadu area is an important center of Aboriginal culture. History suggests Aborigines have occupied the Kakadu area for more than 40,000 years. No fewer than 5,000 sites are a testament to this. Some sites are older than 50,000 years. It is suggested that Aborigines have depicted their life through the rock art. These carvings and paintings also throw light on their origins especially a belief in fairy like  spirits called creation ancestors. Aboriginal lore has it the creation ancestors taught Aborigines how to live. The        rock art points to this. In addition to this there are carvings and paintings of animals such barramundi, mullet           and wallabies. Most visited sites are Nourlangie and Ubirr rock. Amazingly the rock faces at Ubirr has seen    continuous painting since 40,000 BCE. 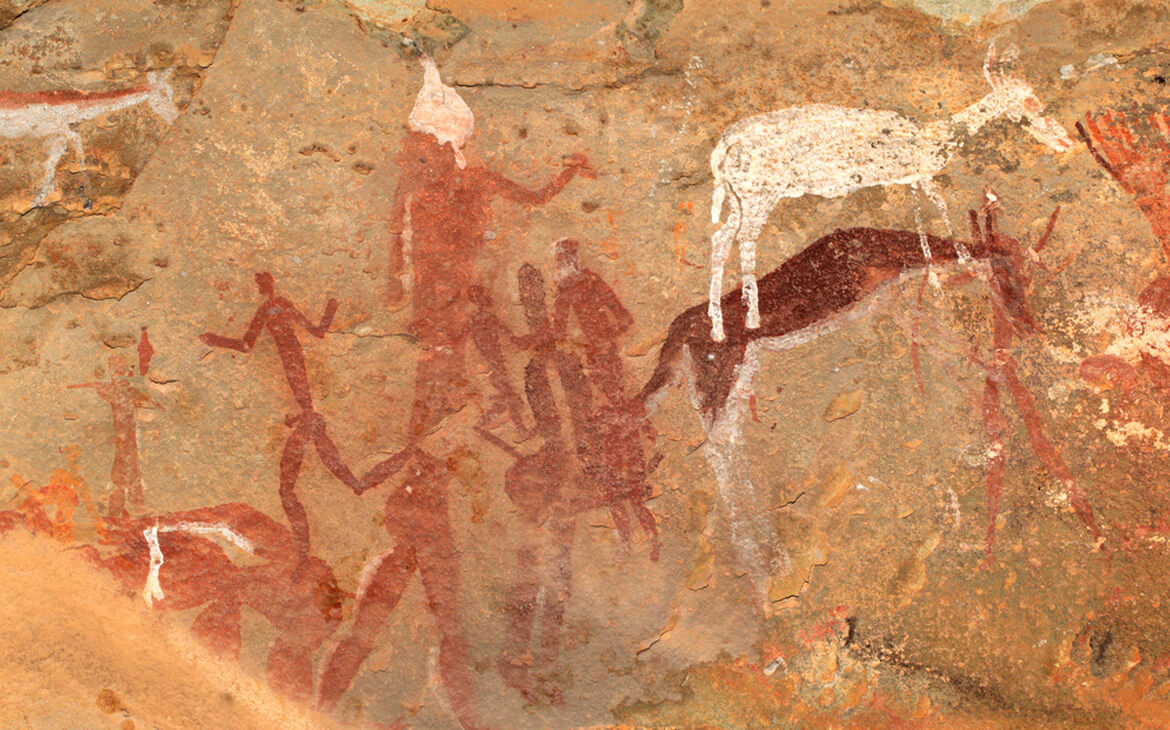 Drakensberg Mountains in KwaZulu–Natal in South Africa is noted for San Bushman rock art. The San-Bushman are an indigenous hunter-gatherer tribe spread across Africa. Mostly depictions from human life and of animals constitute the artwork here. There’s also evidence of therianthropes( creatures who have metamorphosed from humans to animals). The most well-known rock art site is the open-air Bushman Cave Museum found in the Giant’s Castle Reserve. A tourist attraction is a cave with fewer than 500 paintings some of which are said to be as old as 800 years.  In Ndedema Gorge, inside the mountains, 3,900 paintings were discovered in 17 more sites, 1,000 of them alone at Sebaayeni Cave 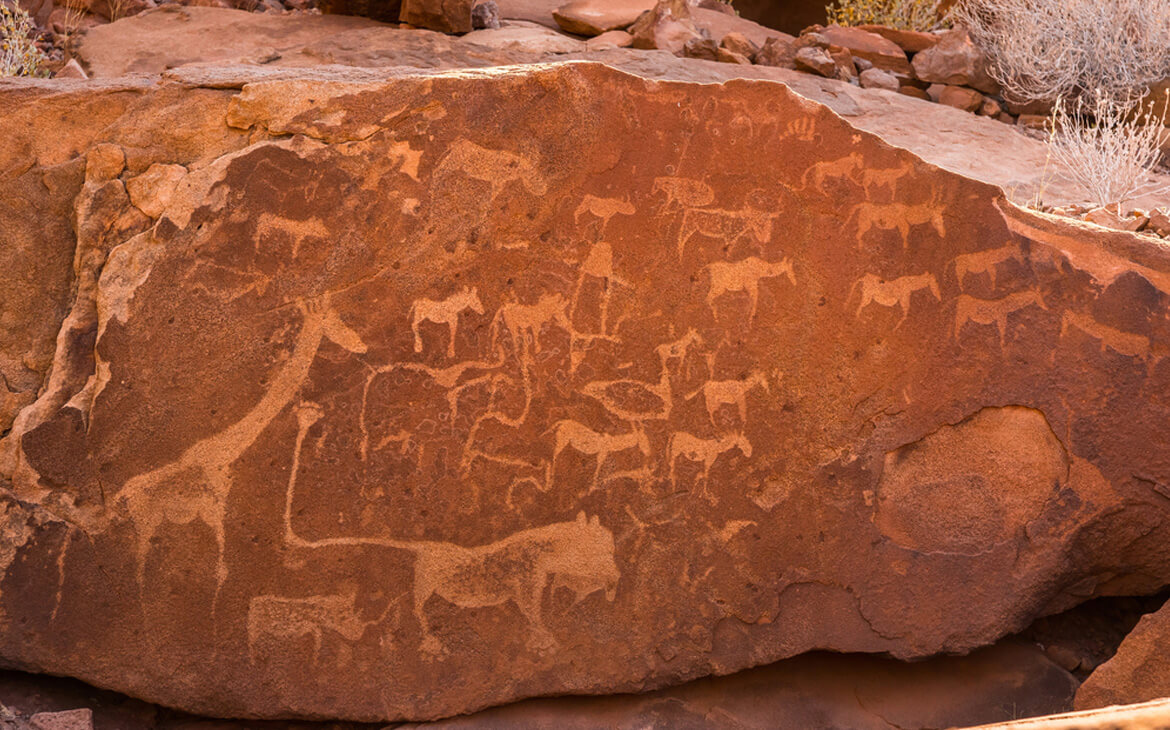 Located in Kunene region of North-West Namibia Namibia, the official name of this site is Ui-Ais. In 2007 UNESCO declared Twyfelfontein as Namibia’s first world heritage site. Two standout features here are rock petroglyphs and rock engravings. Rock engravings seen on rock-faces pay homage to Shamanistic rituals of the hunter-gatherers and Khokoho herders, whose home this for more than 6,000 years. The Dancing Kudu, an engraving of a pregnant cow, is a very famous one. Kudus were looked upon as a representation of fertility. One particular eye-catching engraving is the Lion-Man, showing a shaman transforming into a lion. 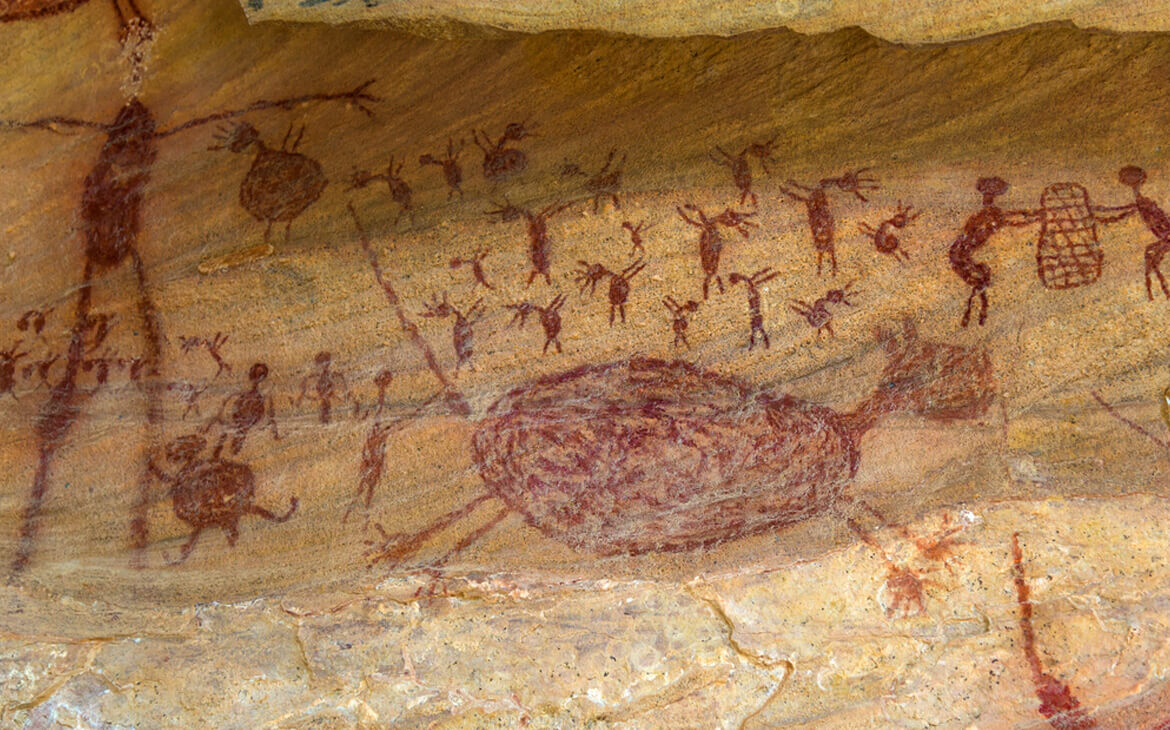 South America boasts of numerous rock art sites, amongst them the Serra da Capivara National Park in Brazil is very famous. The park, founded in 1979, has in excess of 300 archaeological sites. Some of the paintings are more than 25,000 years old. The rock art is mostly comprised of wild animals and human figures. There are scenes showing hunting, sexual activity and dancing. Animals such as a jaguar, a lizard and a red deer have been portrayed. Some hunting scenes where mammals are running together from hunters stand out. Studies show that first hunters and gatherers and then ceramic farming societies inhabited the area near the Serra da Capirava National Park. Discoveries at the Boqueirão da Pedra Furada archaeological site point to human presence even 50,000 years earlier, furthermore the oldest archaeological site containing rock art goes back 10,530 years earlier. 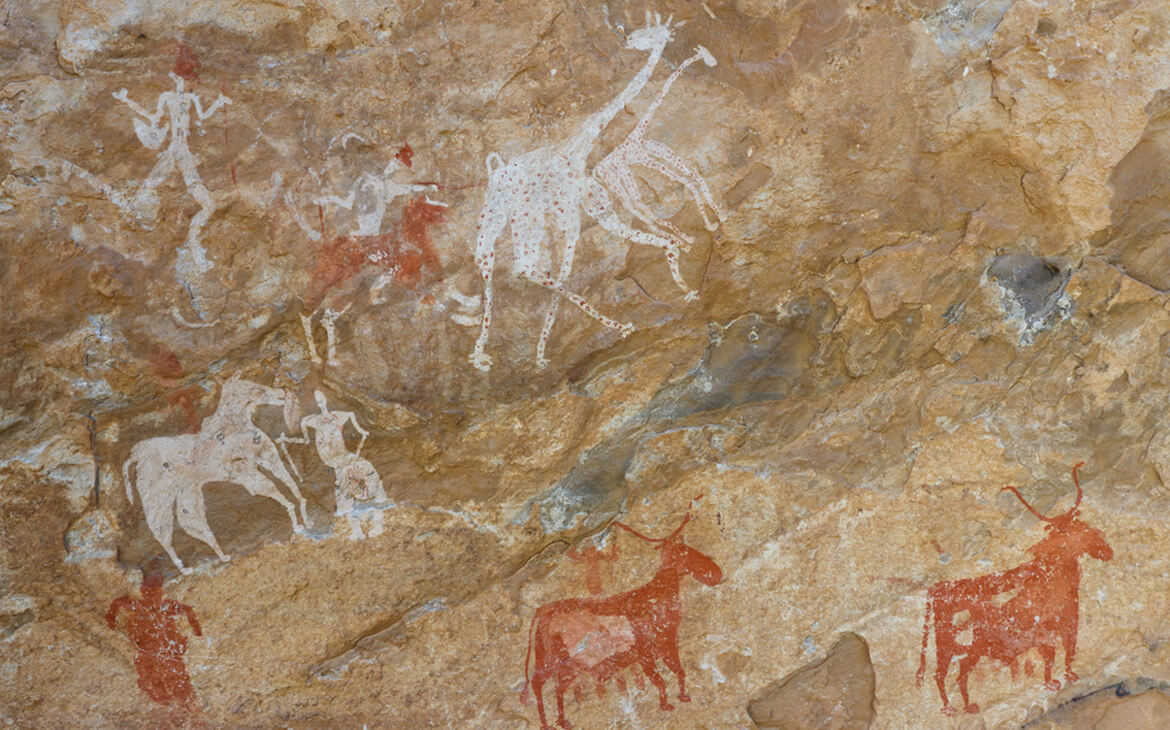 Tadart in Libya is located within the never-ending Sahara desert. It attracts tourists for its prehistoric rock art. In 1985 it was declared a world heritage site by UNESCO. Historical sources suggest the rock art dates to 12,000 BC and point to cultural and natural changes in the Tadart region. Animals such as giraffes, elephants and camels here figure prominently amongst the paintings and carvings. The paintings of the men mostly shown dancing and composing music afford insights into the culture there. 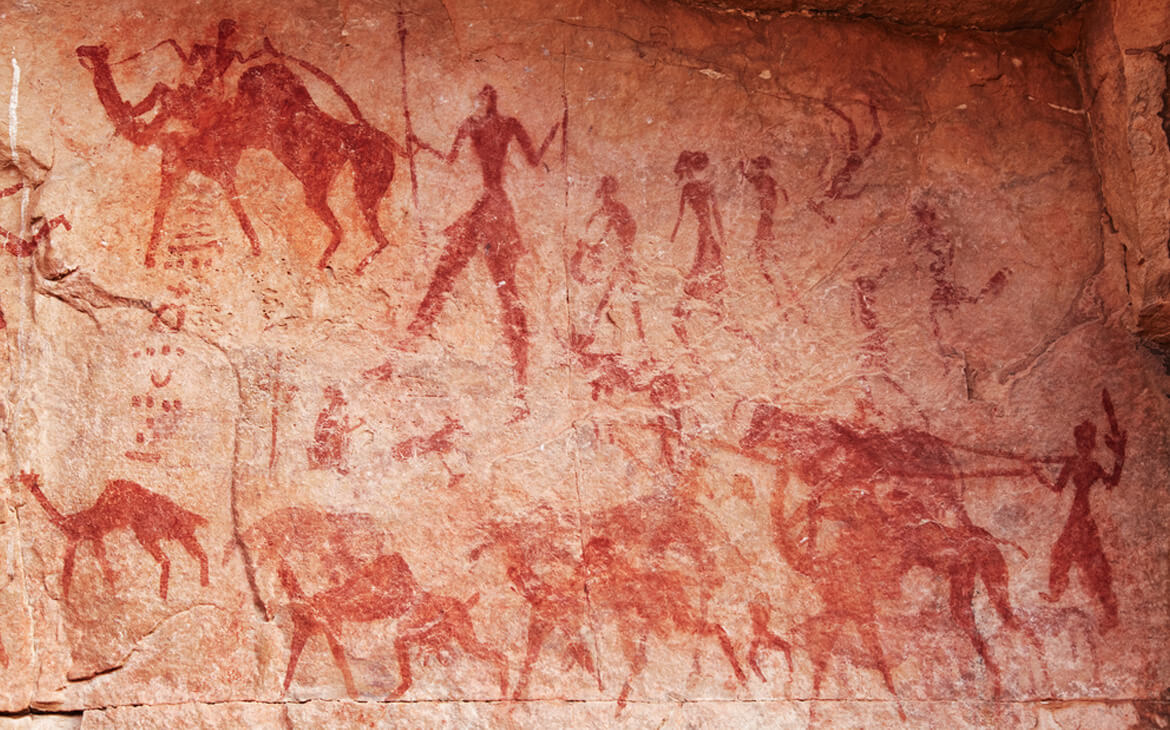 Tassili N’Ajjer, declared a World Heritage site in 1982 by UNESCO, is found in southern Algeria. Discovered in 1933 Tassili N Ajjer spreads across 72,000 square kilometres and stretches to the borders of Libya, Niger and Mali. The most striking feature of this site is a gargantuan sandstone plateau somewhere between 500 to 2200 metres in height. There are no fewer than 10,000 rock art sites and 15,000 carvings which date back to 6000 B.C. The cave paintings are a mirror into everyday life in the central Maghrib(the fertile coastal plain of North Africa, west of Tunisia) sometime between 8000 and 4000 BC. Most of the paintings are the work of hunters from the Capsian period who existed during the Mesolithic period. Some of the carvings are also from the Neolithic age. 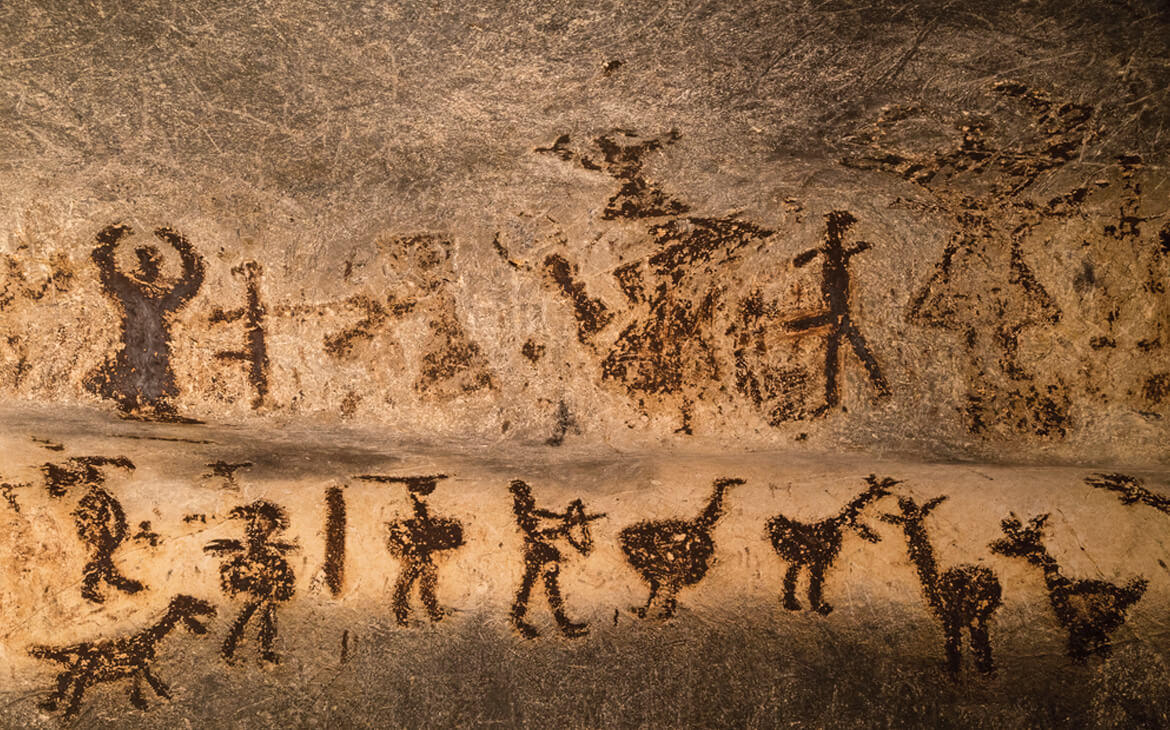 Rock art sites are integral to European history as well. The Magura Cave in north-eastern Bulgaria is a testament to this. One of its most unique features is a limestone Rabisha burial mound. The cave measures roughly 2,500 meters in length. Prehistoric paintings which have been located within the walls are an attraction here. Interestingly these walls have been adorned with bat guano or droppings are decorations. Apart from this mean and women are shown dancing and hunting. Paintings from the early Paleolithic, the Neolithic, the later Neolithic and the Bronze further pique the visitor’s interest. History buffs can pore over a solar calendar from the late Neolithic period. 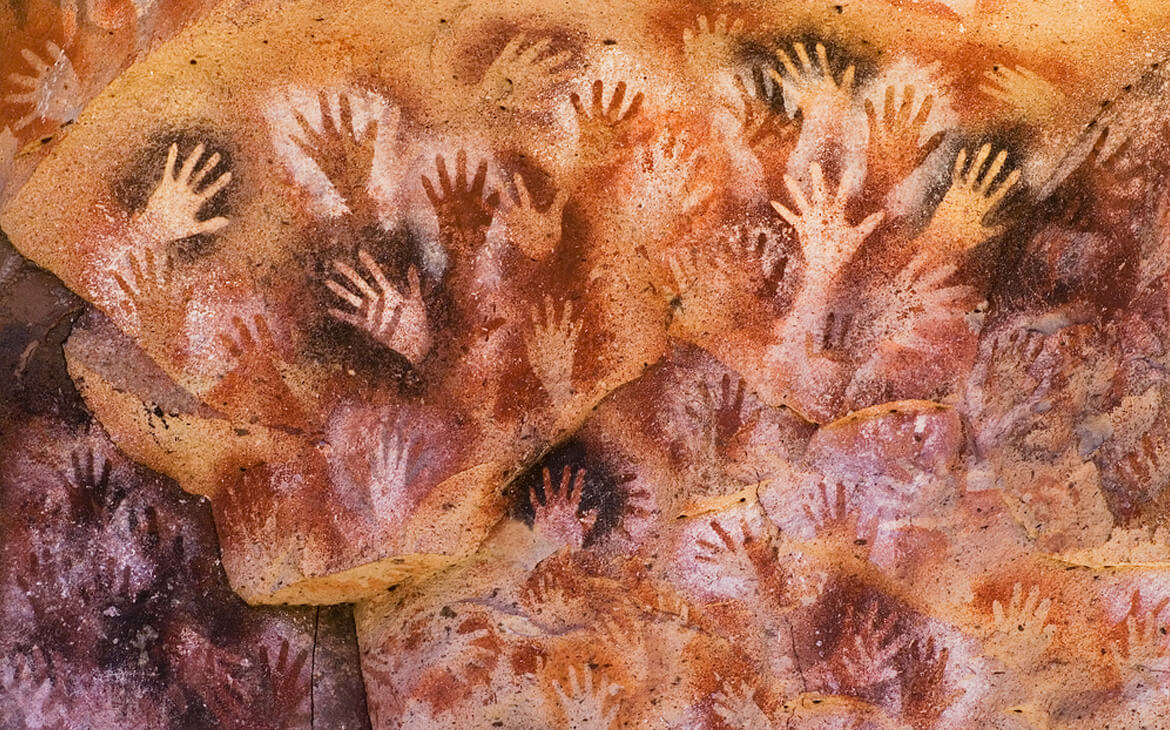 Argentina too is no stranger to rock-art with Cueva de las Manos located in Rio Pinturas. Cueva de las Manos or the Cave of Hands, so named because of the stencil-like outlines of human hands present on the cave walls. Rock-paintings here are the work of the hunter-gatherer groups who according to historical sources lived between 13,000 and 9,500 years ago. The cave also contains depictions of human beings and animals like guanacos, rheas, and felines. Hunting scenes are common here too with individual hunters and groups as well.