Indian classical music has since time immemorial occupied a unique position in the global space of music. From the ritualistic connotations of religious compositions to the passionate expression of folk songs, this capacity for diversity has allowed for Indian classical music to develop into an industry with far-reaching influence. For the last few centuries, classical music in the subcontinent has generated gharanas, or houses which preserve and perpetuate specific schools of music within the entirety of Indian classical sound. Each gharana has a distinctive musical sensibility and impartment which allows the system to flourish. A gharana maintains this individualistic discipline by teaching and appreciating their form of the musical heritage, which has in time come to represent their inheritance and their contribution to the industry of Indian classical music.

Today, the urban denizens of India are distanced from classical music. Our tastes are urban, and this ideology has seeped into our understanding of both music and what constitutes culture. Further, those who wish to fulfill and sustain this bond have to face numerous hurdles – beginning with access and moving all the way to the ability to appreciate. Yet, for those who truly seek our musical heritage, the existing descendants of the gharanas also wish to find them. A legacy is nothing but for those who keep it alive. The glittering city of Varanasi has a sound system at its very core which embodies the religious superiority it claims over the subcontinent. From the chiming temple bells to the repetitive chanting of prayers to the melodious splish-splash of the Ganges, there is music in every corner of the ancient city. At the heart of this sound system was birthed the Benares style of playing the tabla; the founder, Ram Sahai was already a legend for having played the instrument for seven consecutive nights without halting. Discovering the need to improve upon his technique, he created a space where he could withdraw to himself and the tabla, expanding upon his prodigy and the knowledge of his instrument.

When he emerged, the tabla did too – an instrument now capable of unaccompanied performance, making the Benares baj one of the most favored techniques of playing the tabla. Today this baj, this style of making music from the tabla has been handed down like a beacon from one generation of disciples to the next, keeping alive both the music and the art behind it. Many bearers of the knowledge travel the world, holding concerts and imparting their training unto eager students. The Benares Hindu University offers courses, the faculty of which the curious can sit down and discuss the school of music with. The Academy of Indian Classical Music holds extended classes for dedicated students, but one can learn of the history from these gurus who are preserving the future of the Benares gharana, which lies quite literally in their hands. The tabla is indeed the singular most prominent Indian classical instrument of percussion, and the stories of those who preserved its legacy are bound to be fascinating. 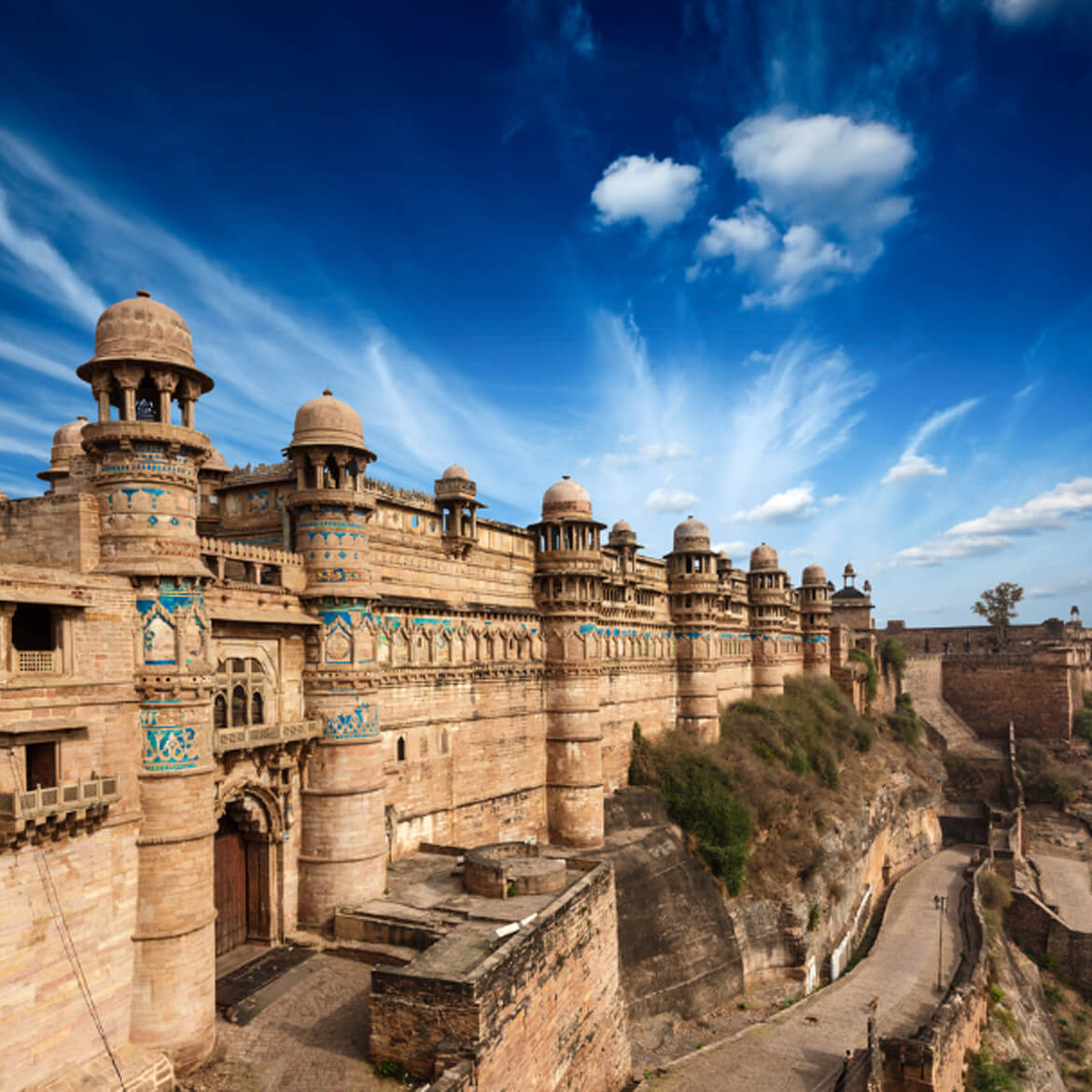 A fairly small town from Madhya Pradesh, Gwalior is known for being the seat of the Scindias and home to the Gwalior Fort, as well as one of the most prolific musical gharanas. Influenced by Tansen, one of Mughal emperor Akbar’s navaratnas, the Gwalior gharana is a result of infusing the contrasting yet harmonious keynotes of Indian classical music with the Persian and Arabic sounds which were a staple of the court at the time. This sculpted not only the ensuing music of the gharana, but also Hindustani music as a whole. What made the ragas and compositions of Gwalior interesting and worthy of impact was the crafted simplicity and the extended focus on magnifying the melodies, and beautification of the swaras that form them.

Today, the ragas of the Gwalior gharana can be heard in the Tansen Sangeet Samaroh, a music festival held every December in the city. What makes the four-day-long festival all the more authentic is the venue, Tansen’s Tomb, where his remains were buried after his death in Fatehpur Sikri. A visit can also be made to the Sarod Ghar, a museum of music set in the ancestral home of Ustad Hafiz Ali Khan to get a glimpse of the development of Indian classical music. The museum houses old photographs and letters, inviting visitors to understand the music of the subcontinent as it grew over centuries. Meeta Pandit, a bearer of the legacy, continues to hold workshops and training in the revered guru-shishya medium even today.

The Rice Bowl of Tamil Nadu, Thanjavur is known for its patronage of the arts, dating all the way back to when the city was the capital of the Chola dynasty. Along with Bharathanatyam, the systematization of Carnatic music was done in Thanjavur. The major contribution to the art form as it is practiced today can be attributed to four brothers who served under the Maratha ruler Serfoji II in the nineteenth century. The king was a known benefactor of Carnatic music, and thus the siblings – Chinnaiah, Ponniah, Sivanandam and Vadivel – learned and composed songs which reveal the devotion they felt towards their guru, as well as the pride of the ritualistic art that he instilled in them. Their utilization of string instruments, such as the veenai and the violin, created a new space for the melding of the indigenous and western culture as would be seen throughout India following the colonization of the subcontinent. The thavil, an instrument born in Thanjavur, is a staple for the percussionists of Carnatic music.

Although the impact of the brothers, collectively famous as the Thanjavur Quartet, was not as much in the field of music as it was in dance – the introduction of the gender fluid Mohiniattam being one – the many moods that were reflected in their compositions and their influence on Carnatic music as a whole can be felt even today. The Tyagaraja Aradhana, an annual Carnatic music festival held at the Samadhi of the singer and saint Tyagaraja, in the nearby village of Thiruvaiyaru. Performances are held in and around the city throughout the year as well. Dewas is a fairly unknown town in Madhya Pradesh, and is home tothe followers of Sant Kabir – who cannot really be reduced to the generic definition of a gharana. One of the country’s oldest and most well-known poets, Kabir is indeed a sant – a saint, for his work has journeyed across not only the country, but also the expanse of the globe. An institution in nations as far off as Kenya, Trinidad and Tobago and New Zealand, the flame of his poetry and legend does not find itself extinguished by time. For almost six hundred years, his songs have worked towards harmony between the Hindus and the Muslims of the land, adhering neither to language or religion, and reflecting his upbringing as a Brahmin child raised by Muslims.

Here in Dewas, the flame of his legacy as fanned by dedicated rural singers who welcome and educate all those who stumble into the area. As the dust rises in the streets, the notes of the music accompanying Kabir’s hymns do as well. Today, Kabir’s extraordinarily massive tome of work is acknowledged for its focus on universality in love and life, and the fact that it goes beyond petty human matters. His Socratic approach towards humanity and the world is both incredible and appealing. In Dewas, singers and followers welcome the curious; Kaluramji, one of the most revered names of the Kabir Panth in India regularly conducts mini-workshops and discusses the history of the poet and the essence of his songs. Perhaps, Dewas is a better syllabus in itself than the small insignificant chapters in the Hindi textbooks of today.

Music is harmony in itself – of the sounds, the words and the stories behind them. Inasmuch, it binds people together and will continue to do so. The discovery of music around us is not difficult; it is in motion around us at every moment. We must only look, or better yet listen for it.

For one who listens to the wholeness of the existence, everything is music. There is nothing which is not music.

A walk through history