“Without libraries what have we? We have no past and no future.”

Time and again, libraries and other homes for books have found themselves questioned for having spread radical ideas and inciting rebellion. It is however, historically and culturally significant to note, that despite centuries of censorship and book-burning, not only is the written word considered one of humankind’s most powerful weapon, but libraries have continued to flourish, risking their position in society to provide us with literature and spread global ideas in order to enrich our knowledge about the universe and that which it does and does not contain. From the library of Alexandria, the ancient world’s most significant collection of world literature, to bookstores such as Shakespeare and Company in Paris, and City Lights in San Francisco, these institutions have proven themselves resilient in the face of adversity, not unlike humankind itself.

For a literarily inclined traveler, to discover a library or a bookstore in a corner of a city dominated by popular tourist locations is not unlike finding Atlantis after years of voyaging. On that note… 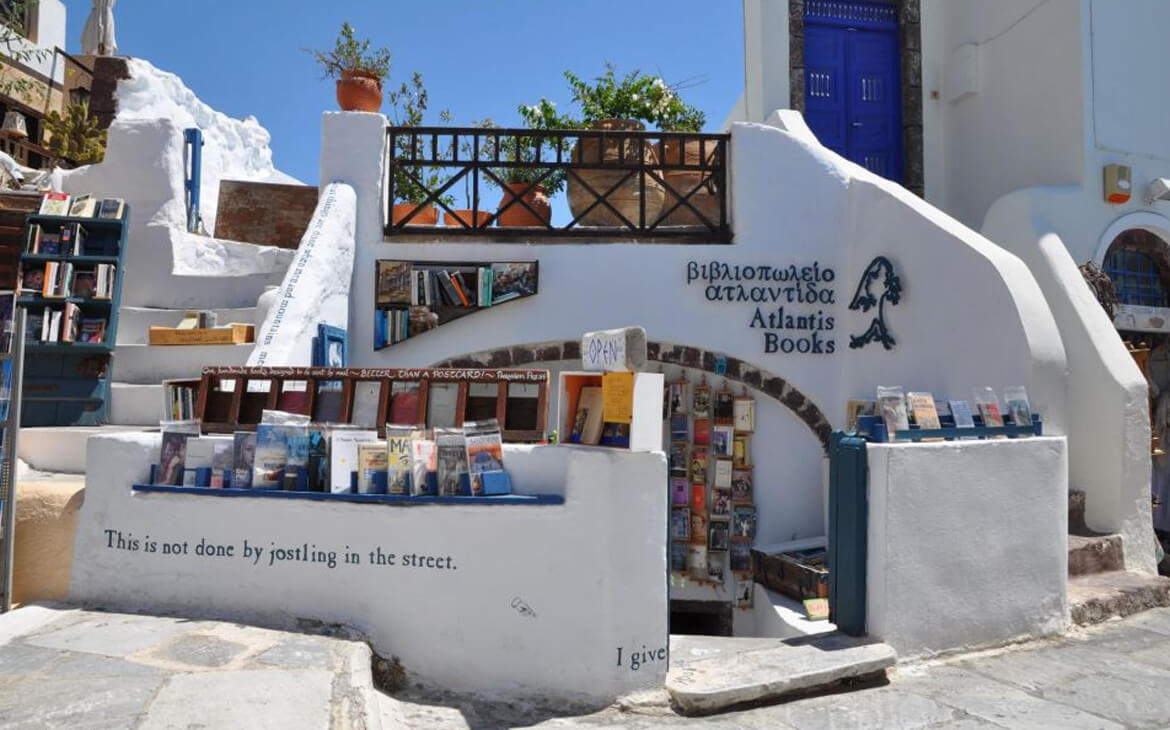 An idea conceived out of wine and a shared love for literature, readers and tourists alike discover their way down the enchanting staircase into the basement of one of Santorini’s famed white houses to Atlantis. The doorway itself has strategic bookcases carved into the walls to match the unique architecture of the land, and interesting quotes painted along parapets, a most inviting library if one ever chanced upon it.

Benches overlooking the vast blues of the Mediterranean have been painted to resemble blackboards, serving the dual purpose of seating and the ascribing of poetry. Plants grow in containers of various sizes, lending the bookshop an appeal ever so homely.

Inside, hand-painted images and signs mark out frequented shelves as well as used books, to which they have awarded the title of pre-loved books. They also rent out cats! The aim of the bookstore is to create a cozy and picturesque haven for readers, and to this effect, they have rustic candelabras, books hanging from clotheslines and pouring out of every nook and cranny. They organize movie nights, poetry readings and have for two years in a row, curated an art and literature festival entitled Caledra.

Atlantis is indeed an island of treasure, awaiting tourists who share their love for literature in scenic Greece. Those who do love books and bookstores are encouraged to visit, and those who don’t are encouraged more so. What better place to fall in love with literature than Greece?

Home to the ancient, and many a time forbidden practice of magic, the Conjuring Arts Research Centre has dedicated an important portion of its space to its library. This museum by another namehouses rare volumes in multiple languages ranging from time periods as far back at the 1400s leading up until the 1900s, making it one of the largest collections of books dedicated to conjuring and illusionary arts, including but not limited to mentalism, escapology, sleight-of-hand and cheating at gambling.

Books on method and technique, letters by and to famous magicians, complete sets of journals published about magic [even those which are now defunct] as well as genuine apparatus handcrafted by the most well-known and exclusive magic-makers and artisans, some preserved for centuries even – all available in Midtown Manhattan, a place likely passed by millions every week without notice.Even a fragment of Geoffrey Chaucer’s Canterbury Tales has been preserved here, as are Harry Houdini’s handcuffs.

While the library does not allow visitors, those with interest can not only take appointments to visit, but also learn some tricks of the trade. This is so that the trade can remain as exclusive as possible, for these are secrets guarded for centuries, and preserved by magicians for their successors. The centre itself, however, is open to the public.

The cherry on the cake has to be that fact that birthday candles are not blown out, but extinguished by a hand clap! 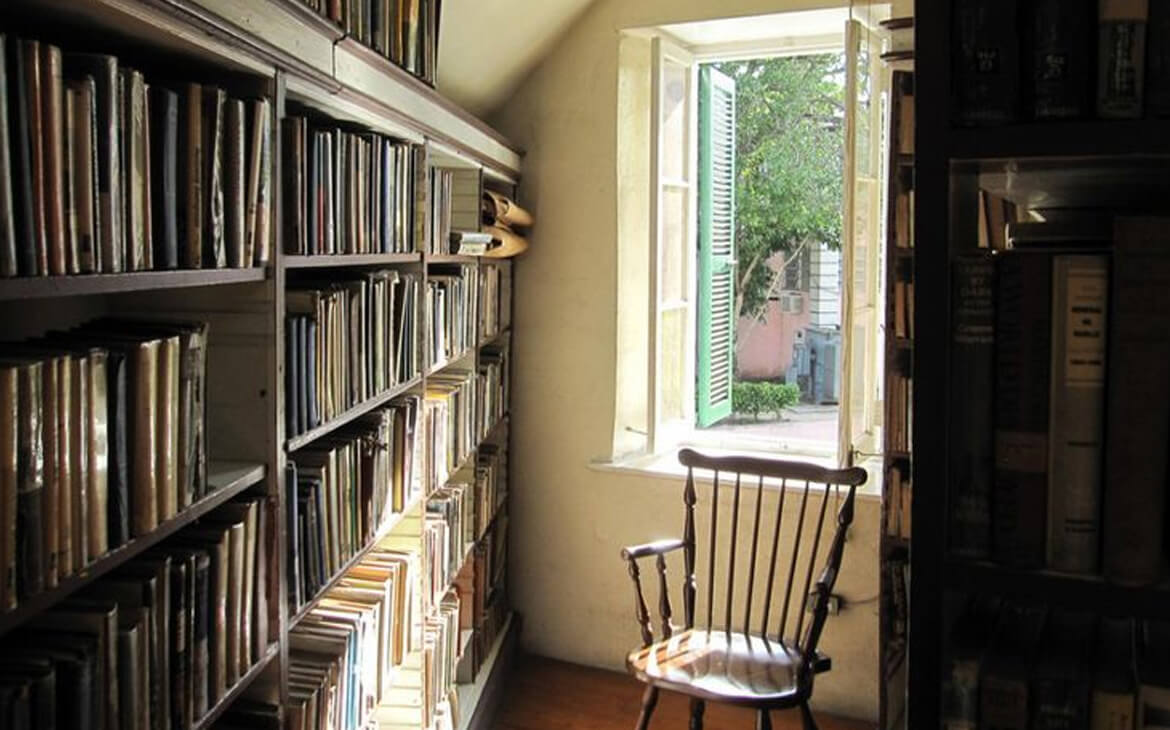 Once a colonial jail, the Nassau Public Library was constructed in 1797, the first building to ever make an address in the Parliament Square, and was converted into a library in 1873. The prison cells that once held colonial prisoners now hold colonial and Arawak documents, newspapers, books, artifacts and historic prints. Since its advent, the library has expanded rabidly, offering a multitude of services to patrons such that they may access the vast expanse of study material and documents in order to undertake or learn about colonial history and rule. All reading material is available to the public for free.

The once busy prison, the library has the odd distinction of being the only octagonal building in the Bahamas, with four stories constructed from local stones. Alcoves that decorate the rooms owe their design to the trends of colonial times. With multiple floors and reading rooms, as well as a veranda offers a fantastic view of the entire city, it is the largest in the country.

The library serves as a point of reference for the entirety of Bahaman history, as it houses records from the 1700s and has been updated ever since. For a curious visitor, the attic contains old artifacts which are not fit for public perusal due to their fragile nature. The library is most especially visited by architects in the region and those from outside, owing to its unique construction and historical relevance. Those with a historic bent are encouraged to visit!

Renowned worldwide for its quirkiness, the charming BooksActually has made a name for itself in the independent book circuit. Recommended by local and international poets and authors alike, it was founded by Kenny Leck and Karen Wai, the former of whom has found a place repeatedly as one of the “Ten Most Powerful People in the Arts in Singapore”. The store also publishes and promotes Singaporean literature by way of its boutique printing-house, Math Paper Press. Further, it promotes independent publishing houses in other countries as well.

As a literary nucleus in Singapore’s emerging literary mechanisms, the bookstore sets up pop-up stores across the city, and support local artists by organizing book launches, poetry readings, music sessions, and exhibitions. It has promoted at least twenty anthologies of poems by indigenous poets, and their focus is on“obscure and critical works”of Fiction and Literature.

BooksActually also has an in-house merchandise brand, Birds and Co. which creates trinkets and knick-knacks for purchase, including stationery, hand-stitched notebooks, gift cards, monogrammed pencils and DVDs. All their events, which take place periodically, are celebrations of literature, recommended to all who enjoy an evening dedicated to poetry and music!

The city of Magdeburg, with an other wise imbalanced current economic situation, has every right to boast about its rich history and architecture which happens to include an open air library constructed out of beer crates!

The unnamed library was designed as part of an urban planning experiment to reinforce the social networks in and around Magdeburg. The project was instigated by a group known as KARO with the help of the local residents, their motivation being the creation of an open air library by utilizing recycled materials. Which abundantly available material could Germans possibly use to construct a building structure? Beer crates! The team used more than 1,000 empty beer crates to make the building, thus converting the otherwise useless remains of the country’s number one beverage into a project of community development and social art.

The institution is based on the concept of a “confidence library”, such anyone can just walk into the space in order to read, explore, or even just gawk, all for free. People can even take the books they like with them with the condition they either return it or replace it one of their own books. The library has around 30,000 books today as a result. Moreover, the library has a distinguished space which includes a stage where theater plays, public readings, concert gigs performed by local bands, poetry slams and much more.

Who wouldn’t want to snug up in a cozy crate corner with a novel instead of the traditional chair-table libraries?Indeed, it is reading halls or shops like these which restore the sociocultural bond humans have shared with literature for so long. Whether it is their architecture, their literary legacy or even the stories behind them, these buildings have metamorphosed into so much more than walled structure – they are historically significant for having preserved the sanctity of literature, promoting it and providing it the appreciation it so rightly deserves. Libraries across the world are worthy of visits, from the Asiatic Library in Mumbai, to Word on the Water in London, to the Museum of Picture Books in Japan. After all, it is the readers and the dreamers who make the world go ‘round! 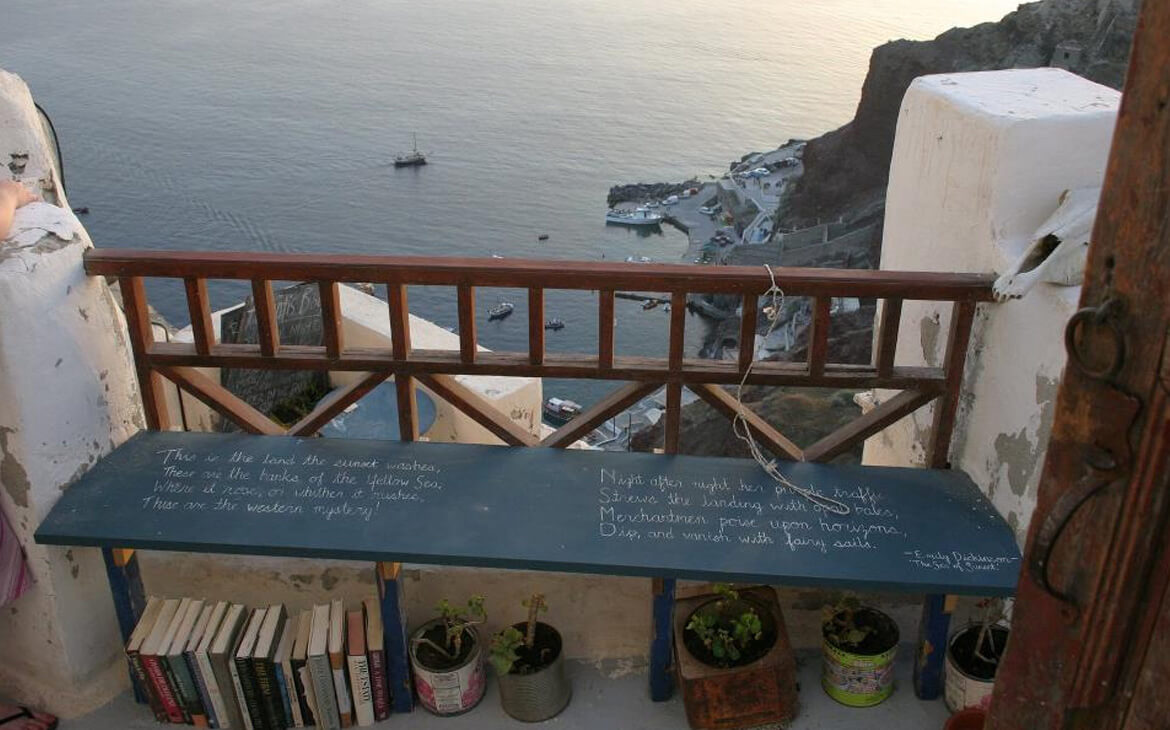 For a look into these and more such quirky places around the world, get in touch with us at [email protected]