I have to admit, I had been a little skeptical about Croatian food before my trip to Croatia. Since the country has such a long coastline, I assumed the country’s food is all about its sea food. Even Google turned up images of seafood during the pre-trip research phase. A little dejected, I stuffed my suitcase with packets of instant noodles and other ready to eat varieties.. just in case. Boy, was I in for a surprise! Clearly, my research was not up to the mark. The culinary landscape of Croatia is as diverse as it’s physical landscape. From Italian influenced coastal cuisine to the Central Asian touch in their meat preparations, Croatia has so much to offer. The country does not have many international food chains which encourages you even more to delve into their cuisine.

Oh So Italian! Croatian food is heavily influenced by Italian cuisine due to its location and the fact that Croatia was a colony of the Republic of Venice for over 300 years. For me, that was a big hit. I love Italian food. I can live on the creamy, cheesy, herby preparations for the rest of my days. (The husband, however, is a true desi at heart. After a few days of the pizzas and pastas, he was craving his chicken curry and biryani.) Irrespective of where you go in the country, you will never be deprived of a well made Italian dish.

Gelato is perhaps the best export from Italy. Well.. according to my palette at least. Having been to Italy in the past and having sampled some of the best the Italians had to offer, the Croats are not far behind. I am embarrassed to report how weak our will powers are for we always got lured into every gelataria we walked past. I have never seen my husband, who really doesn’t care much for the milky treats, have so much gelato over the 13 days we were in Croatia. I guess you can’t really help it.. when you have the creamy texture and the richness of flavour, (coupled with the need to have something soothing under the blazing sun) it is impossible not to succumb to them.

The best part about the Gelatos are the plethora of flavours that ensure boredom is not a word you’re introduced to. Where would you have come across flavours like Rum and Coke, Snickers, Raspberry Yogurt, peanut butter and Jelly, and my absolute favourite – Tiramisu. The husband and I celebrated our last day in Croatia with two scoops of gelato.. each! That’s how much we loved it! 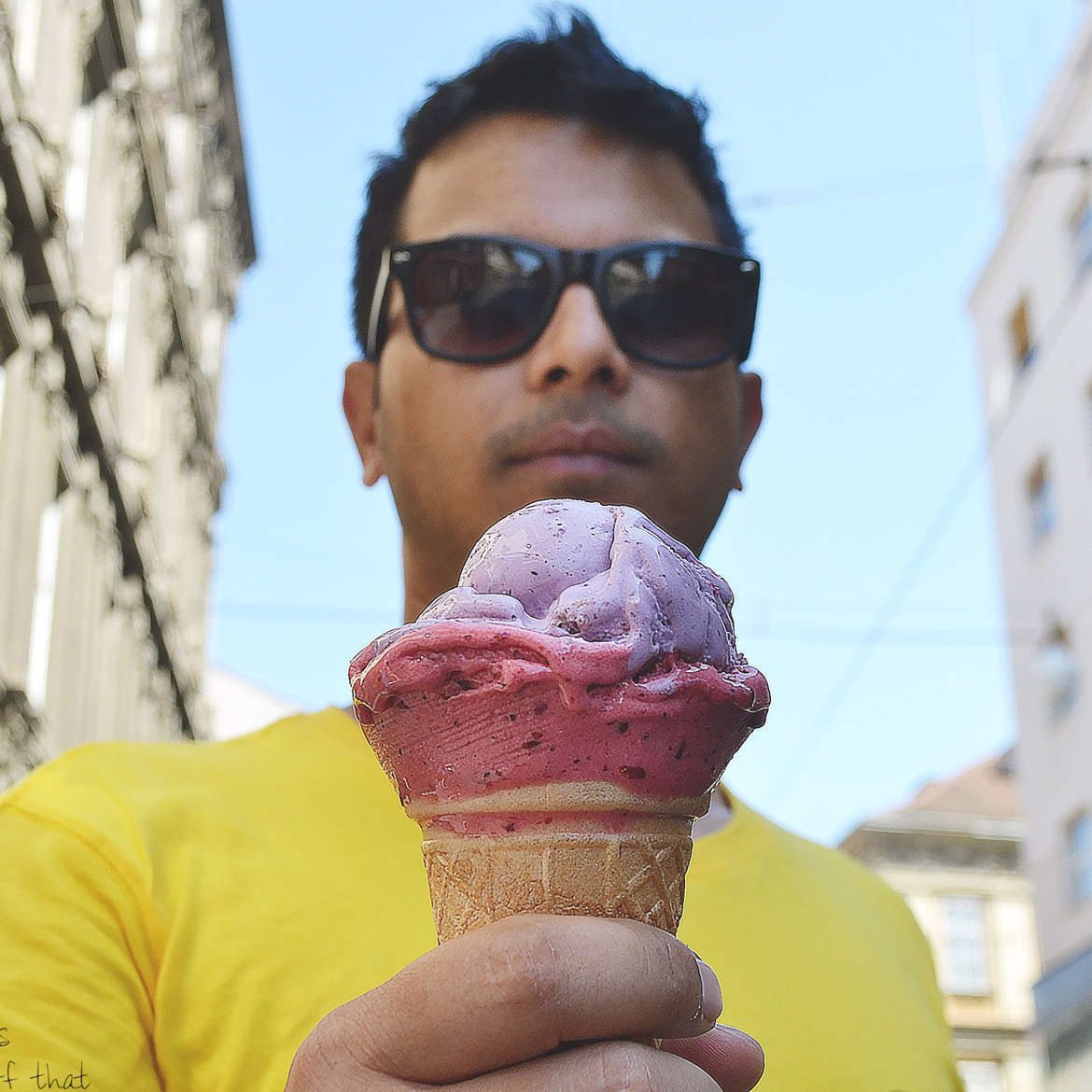 Fresh from the Sea…

I am not the biggest fan of seafood. Although I am trying to expand my palette in that direction, the progress has been particularly slow. Hence my afore mentioned skepticism about Croatian food. Although I didn’t brave ordering my own seafood dish while travelling, half the people on the yacht we were travelling on, binged on the local sea food preparations in the little villages we stopped at, and so did Hubby. I gingerly had a bite of a squid dish he had ordered one day and was left craving for more. This had never ever happened before. What puts me off most about sea food is the smell, but this was super fresh. It was evident from the ooohs and aaahs on the table that the bellies were satisfied.

If you like sea food and would like to experiment, most of the cities along the Dalmatian coast is where you should be. The display of catch that I saw, especially in the smaller towns of Korcula and Hvar was extraordinary. They had different types of fish to shellfish, octopus and oysters even. For a seafood lover, the Dalmatian coast will not disappoint.

Hello spices! Having left a part of our hearts in Istanbul last year, we were thrilled to experiment a bit with the meat preparations in Croatia. We got quite excited when we saw Burek and Cevapi which almost felt like familiar food. We had Cevapi in a few different forms through the trip. One of the most memorable ones was in a burger in Sebenik. The burger was lined with Ajvar (a bell pepper relish) which teases the palette with its sweetish tangy taste and the Cevapi satiates it with its spicy grilled meat. A match made in burger heaven.

What you must not miss when you travel to Croatia is Peka – a slow cooked meat and veggie dish which is very traditionally Croatian. Peka is prepared in an earthen pot and cooked in a fireplace over hours to achieve the perfect texture that melts in your mouth. It is available in various types of meat and has a veggie version as well. In the most traditional restaurants, they advise you to place your orders a day ahead to ensure you have the best Peka experience.

Another one for the ‘must do’ list. With its distinct flavour and originating from the heart of the country, it is the most loved cheese in the country. Pag cheese is a hard cheese made from sheep’s milk that gives it its signature taste and colour. Although it is best had with wine, we had it with our rum and enjoyed every little bite.

Pag Cheese has quite an interesting origin. It originated in the Pag island of Croatia which has been rendered barren by the strong northern winds. This wind also carries with it salt from the sea and therefore the only vegetation that survives is of the highest aromatic quality which eventually gets lined with natural salts. This is what the sheep feed on which results in the glorious tangy Pag Cheese.

The Croats, like the Europeans, really enjoy their liquor. We practically lived on Karlovacko and Ožujsko. The two beers are perfect for the Kingfisher conditioned Indian palette. Beachside, warm afternoon, chilled beer.. life is sorted!

Croatia is also known for its wine which is slowly gaining recognition in the global market. Being in the same belt as Italy, coastal Croatian wines are similar to Italian wines. However, majority of the wine produced in Croatia is white and from the continental region. One of the stops on our island hopping yacht trip was Korcula, which is known for its wine production. While there are several organized wine tastings on the island, we decided to have a wine tasting of our own on the yacht. We all got a bottle of wine along with some accompaniments like cheese and olives and had a wonderful time tasting the different varieties of wines.

We found a little hidden gem in the local farmer’s market in Dubrovnik – the Croatian homemade liqueur. I have never seen such a variety of liqueur in my life! They had rose, lavender, plum, honey, herbs,… I could go on and on. Actually, they could go on and on. Be warned, these liqueurs are STRONG! They are packaged in beautiful bottles and make wonderful gifts to take back home. We picked up Rose liquor which was in a bottle in the shape of a high heeled boot. No prizes for guessing who made the decision to buy this one!

Candied nuts and peals are one of the most common sweet nibbles you will find in the country. The farmer’s market that we went to in Dubrovnik had stalls lined with varieties of these sugar coated almonds, orange and lemon peels which goes to show just how popular they are. My favourite desert in Croatia though, was Madjarica. This traditional layered cake looks absolutely stunning with its delicate chocolate and biscuit layers. The best part about it is that it was not messy. It made a perfect companion for the road trip and we could eat it like a sandwich.

Dining in Croatia is made that much more special with the restaurants that are beautifully carved out in the narrow streets of any of the Old Town areas of any of the cities in the country. For the architect in me, this was a jackpot! Having a beautifully cooked meal by the walls that talk of centuries of history, or having coffee along a cobble stoned street, or even having a drink on the cliff side of the old walls (talking about Dubrovnik here), it really doesn’t get more romantic than that. The spaces get transformed into even more dreamy as the sun sets and the soft mood lighting kicks in. The spaces have a quality that ease conversations (wine helps sometimes as well!). Sitting outdoors, having that wine with your friends or your partner makes for wonderful experiences and the most beautiful holidays. 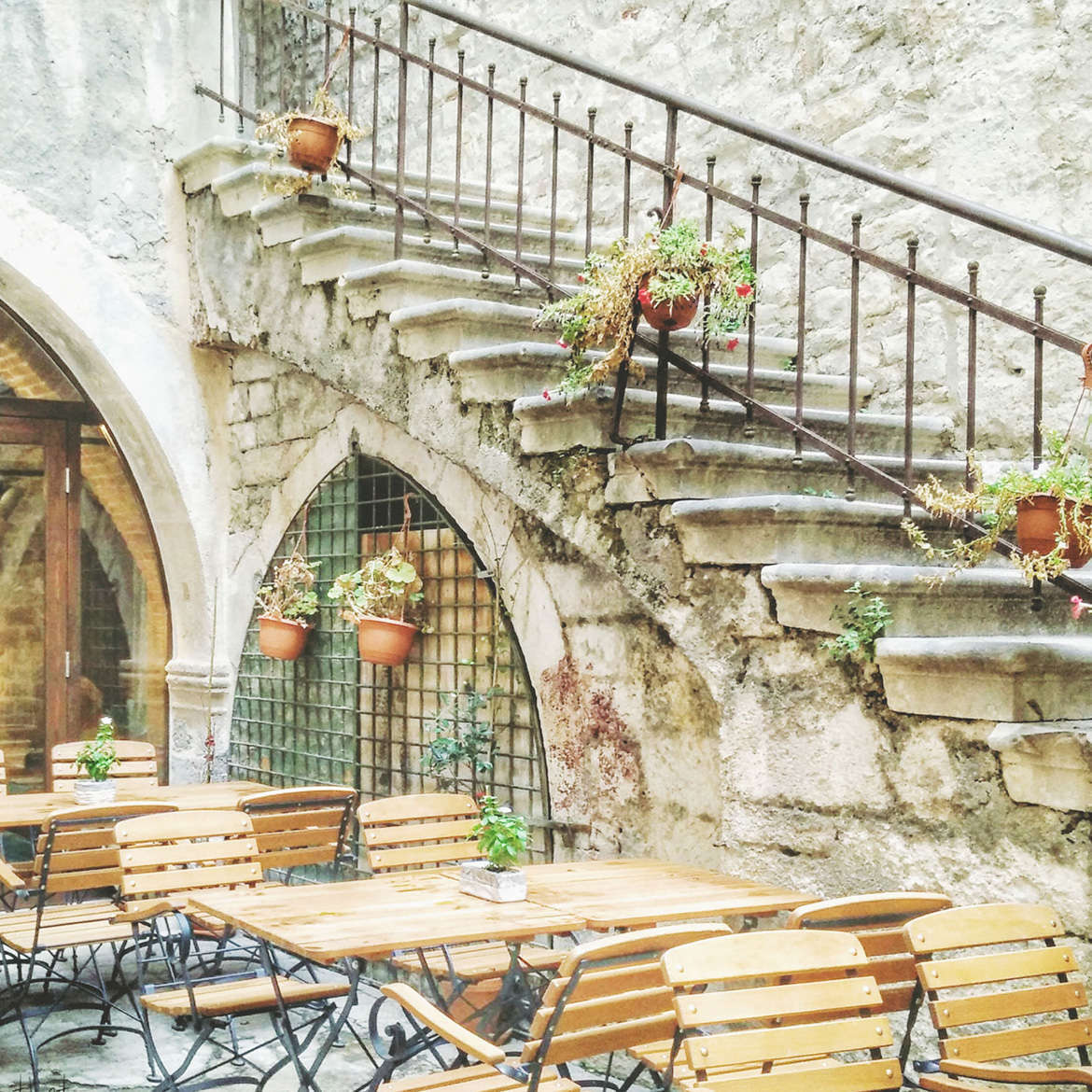 Article & photographs by our guest writer and a travel enthusiast Pooja Deshpande who also has her own Travel and food blog ‘a bit of this and a lot of that” .